Last week we built a Prog Rock knowledge graph using data from Wikidata and MusicBrainz. This week we’ll see how we can use Neo4j, Cypher and some of Neo4j’s Graph Data Science Library to create some insight from the knowledge graph. And as a bonus for coming back and reading this after part one, I’ll spare readers the tenuously linked Prog Rock related subheadings…

Which country produced the most Prog Rock bands?

As an introduction to Cypher’s aggregate functions, we’ll see which country out of UK and Italy produced the most bands. Unfortunately, when I originally created the knowledge graph, I filtered based on the bands formed in either the UK or Italy but I didn’t save this to the graph. So the first step was to query Wikidata to import this into the graph:

I then needed to relabel the countries because n10s automatically gives these nodes the label Resource (I assume there’s probably a better way to fetch the data from Wikidata via n10s to prevent this but I’ll go through the steps I ended up taking anyway).

Finally, add a name tag to each of the countries

We can now run a simple query to count the number of bands from each country. You’ll notice that Cypher doesn’t need a GROUP BY function like a traditional SQL query, it automatically groups by any non-aggregated variables.

And there we have it, 114 bands from the UK (115 technically as one was classed as England) and 36 from Italy.

Which bands have had the most members?

Another relatively simple one to familiarize ourselves with aggregation functions.

And we see that Uriah Heep are the merry-go round of the Prog Rock world. Whether they’re really a Prog Rock band could be up for debate but they did have multiple Roger Dean album covers so that probably qualifies them.

Which band has released the most music?

Let’s have a look at which band has released the most music by the total duration of all their tracks combined.

Let’s have a look at how the various band members are related based on whether they played together in a band. To start with, we need to create the relationship PLAYED_WITH between any pairs of musicians who were in the same band at some point (note that this doesn’t take into account which years each member was in a band as this data wasn’t readily available through Wikidata or MusicBrainz).

We use the condition WHERE ID(m1) < ID(m2) so that we don’t create the relationship in both directions.

From here, we can start with a simple example of trying to find a path from King Crimson bassist John Wetton to drumming legend Simon Phillips using the shortestPath function.

The results allow us to visualise the path from Wetton to Phillips via the various bands they’ve played in. 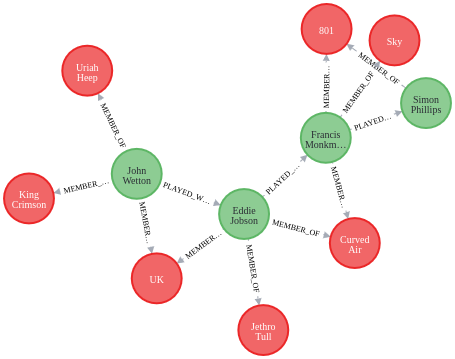 How well connected were the members of Asia?

For those who don’t already know, Asia were a Prog Rock super group formed in 1981 featuring members of King Crimson, Yes, The Bugles and ELP. Steve Carell even framed a poster of their debut album in the 40 Year Old Virgin 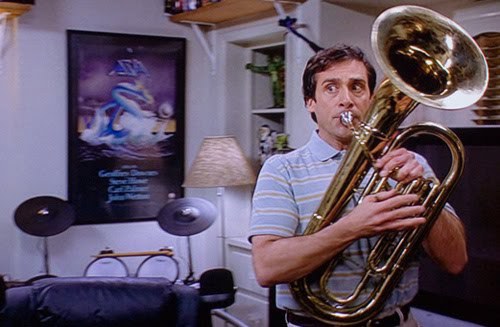 In the above query, we’re collecting all the members of Asia in one list, all other Musicians in another and then iterating over each pair of an Asia member and non-Asia member to find the shortest path between them. From there we collect the size of each path and use the reduce function to sum them all up. From the results, we can see that John Wetton was the best connected member of Asia with the lowest number of relationships needed to reach the 198 other musicians.

Next up, we will use Neo4j’s Graph Data Science Library (GDS) to see if we can detect communities with the Prog Rock Knowledge graph using the Louvain method. First off we need to create the projected graph containing Musicians and the relationships we want to use in the algorithm.

From there, we can stream the results from the function and write the communities and intermediate communities back to the knowledge graph 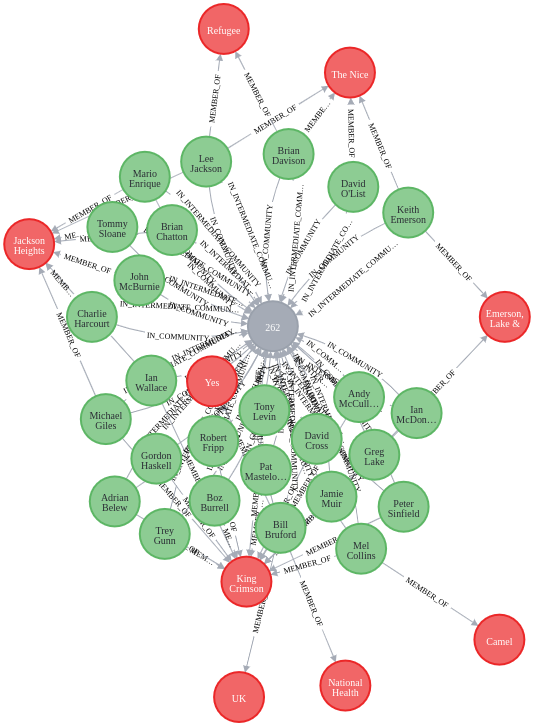 We can see that community 262 contains the founders of the English Prog rock scene in Yes, King Crimson and ELP. 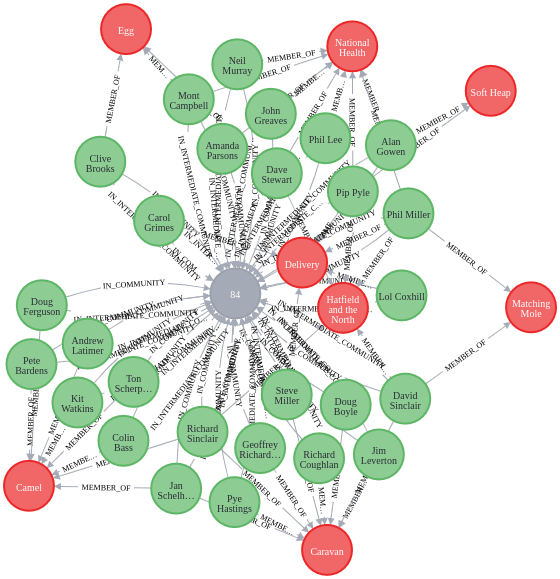 Community 84 contains many of the bands who started the Canterbury Prog Rock scene. 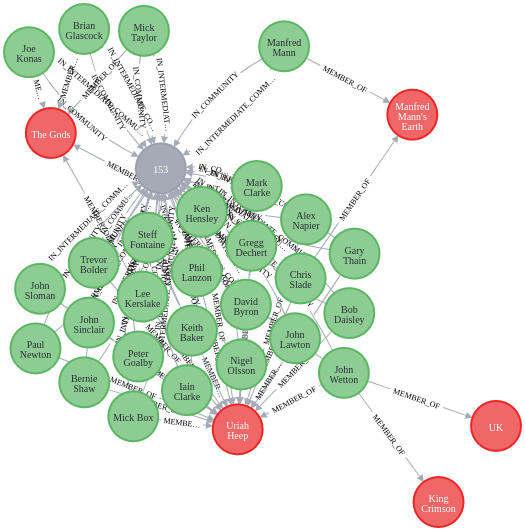 Finally, Community 153 seems to be defined by members and bands related to Uriah Heep.

The last thing we’ll look at is using graph embeddings to represent the knowledge graph. This was done in Python using the Neo4j Python Connector.

Firstly, we need to create the embeddings using the FastRP algorithm. I’ve chosen 4 dimensions for the embeddings but in reality this could be larger in order to maintain as much info from the graph as possible.

This data can then be transferred into a Pandas DataFrame.

We can see from the last line that by using PCA, we can extract roughly 61% of the information from the data by using only 2 variables. We can now visualise how these embeddings transform the knowledge graph into traditional vectors. First we’ll take a few bands as examples for the visualisation.

And then we can plot the data 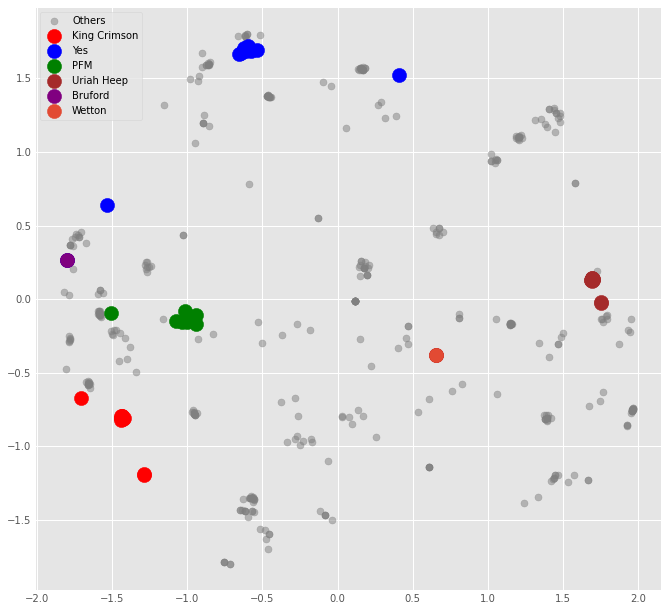 Interesting things we can see from the embeddings:

Overall I enjoyed building the knowledge graph and running some queries on it. I think there’s loads more I could so with the community detection algorithms and the embeddings but these were a good starting place to familiarise myself with the Neo4j tools and GDS library. If there are any questions or feedback then I’d love to hear it so please feel free to get in touch.