Well, I think it’s only right we start with an apology for the post title. Sorry. However, it will most definitely happen again. So not that sorry I guess.

This week I’ve been exploring GraphQL, a query language for API’s that works incredibly well with graph databases. With GraphQL, we create types that describe our data. A pretty self explanatory example for a person:

We can then query the API for only the information that we want:

And finally receive only the data we have requested:

So following on from some previous posts on using some Premiership Rugby data, we’ll create a GraphQL API based on the Neo4j database.

For the next post, I’ll be looking at how we can incorporate calls to other API’s when querying the GraphQL API. This will need the data about each teams stadium, so this was loaded into the database from a csv.

Linking each fixture to stadium

To go about this, I had to sum up the points scored by each team in a game from the match event data and then match this to either the home team or away team full time score.

The next step was then to simply link the venue to the home team.

When building the GraphQL API, I thought it would be best to use a very simple model to familiarise myself with the language and system. Therefore I took the OPTA match data used in previous posts and simplified it by only keeping the Fixture, Appearance, Team, Player and Referee nodes, thereby eliminating any of the actual match events. However, here came the next issue. It wasn’t as simple as running the following query to eliminate said nodes.

This query didn’t finish and needed a restart of the database to get things running again. If I ran this query again, I would need to increase the heap size in order to make it finish I think. Luckily, APOC has a apoc.periodic.iterate function which allows the process to be ran in batches and in parallel.

Some of the deleted nodes may have been connected to each other while this query was running in parallel causing a couple issues on the first run leading to some nodes not being deleted. A second run of the function sorted this out. The alternative would have been to use {batchMode: "BATCH_SINGLE", batchSize: 100} in order to avoid any issues or alternatively save the node ID’s of the nodes to be deleted as a param and pass the list of node ID’s to apoc.nodes.delete.

To create the type definitions for the GraphQL API, the Neo4j GraphQL library can automate this by reading the database and creating the schema.graphql file with the @neo4j/introspector package.

To get started, we can store our Neo4j credentials in a .env file

From here, we can then create a file that introspects the database to create the schema file. If you’re not using the default neo4j database name, then don’t forget to pass the database name as an arg to the driver.session function. I lost 15 minutes of my life wondering why there was no schema being generated only to find I was querying an empty database. I refer you to my earlier Elf gif.

The following code was taken mostly from the Neo4j GraphQL docs.

So what does the output of the introspector look like? The generated schema.graphql is below:

If we take the Player example, we can see how the GraphQL schema reflects the database schema. We have:

The API - Creating an index file

All it needs now is to run node index.js and we have a GraphQL API up and running at http://localhost:4000/ which can be accessed in the browser using the Apollo Explorer or via GraphQL Playground.

Now we can throw some simple queries at the endpoint. I’ll not go over creating queries in too much detail here (just refer to the GraphQL docs for more details) . But here’s a couple examples. Firstly, a query to return all teams and their respective team ID’s. 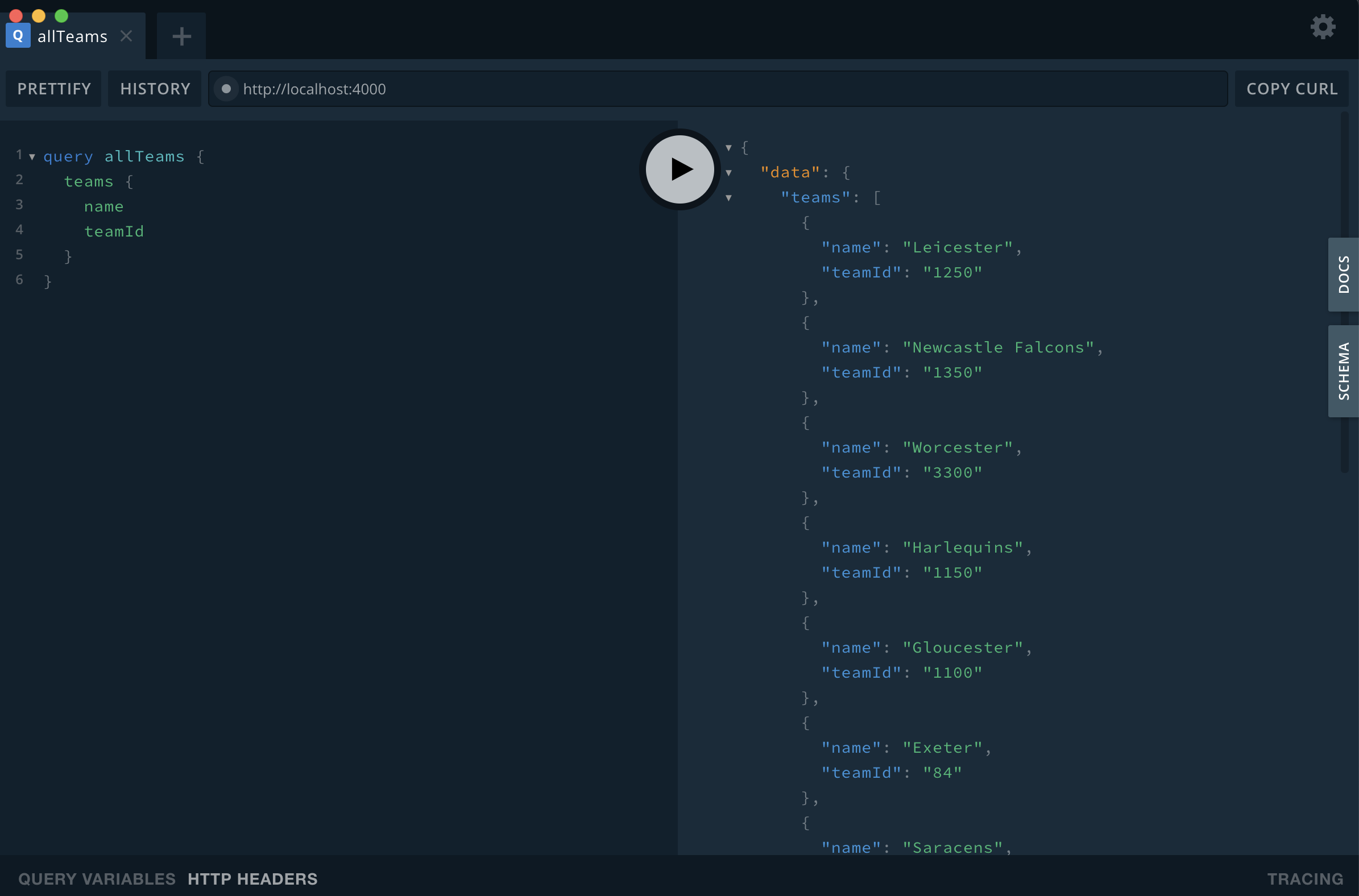 And next up, we can take a slightly more complex query. Breaking it down:

So there we have it, a simple GraphQL API up and running returning data from a Neo4j database. The next post will look at how we can extend the type definitions in order to include customer Cypher queries.