In last weeks post, we loaded up a graph with research papers and the associated authors and institutions. This week we’ll look at a few different things:

One way to analyse the graph is to examine the centrality of the nodes - this is a way to determine the importance of distinct nodes in a network. When looking at research papers, one of the easiest ways to determine the importance of a paper would be to use a PageRank or more likely Article Rank type algorithm as these are specifically designed for this use case - essentially a paper is only as important as the papers that reference it. In our case, when we’re looking at authors of these papers, we can look at Degree centrality based on the number of co-authors. Lets see how this would look to code up. We’ll start by connecting to our database:

And next we need to create our graph projection, creating the relationship with a count of how many papers have been co-authored:

The next step is to run the algorithm and write the results back to the graph.

And looking at the table, the results would make sense as these researchers would be some of the most prominent. However as quick sanity check, we can run a simple query to see which authors have the most co-authors.

And although not perfectly aligned, we can see that the degree centrality score would make sense.

Betweenness centrality is a way of detecting the amount of influence a node has over the flow of information in a graph. It is often used to find nodes that serve as a bridge from one part of a graph to another.

Using the betweenness centrality algorithm, we can use the same graph projection to see which nodes have the most influence over the flow of information in the graph.

And as we can see above, some of the researchers with the most co-authors come out on top but not the case for everyone. Those that form the link between mulitple research groups may be the ones who control the largest flow of information between the nodes.

We’ll start by using the FastRP algorithm and although the docs suggest it can only be ran on an homogenous graph projection, the Neo4j forums suggest it can be ran on heterogenous graphs, so we’ll run with it and see what the outcome is. I’d also suggest looking at Zach Blumenfeld’s code for good examples of this

We’ll start by creating a new graph projection based on research papers and their authors.

Next we can create the embeddings based off the new graph projection.

The screenshot below shows a sample of the top results with a similarity score of 1 and we can see that papers authored by the exact same authors have the highest similarity.

And as we get further down the similarity scores, we can see that the list of authors remains similar but there are some difference.

We can also run a similar query but examine the similarity between authors.

This one is similar to the results above. For people who only have one co-authorship between them, they get a similarity score of 1. If we have people with co-authorships but also papers not co-authored with the other person, then this is where the similarity scores start to reduce. However, I’d question the value of this over a simple jaccard similarity based on a bipartite ‘Author’, ‘Paper’ graph projection.

To finish this week’s post and lead into Part 3, we’ll extract the entities from each of the paper abstracts and use them to create Entity nodes in the graph. Fortunately there’s some apoc functions which will allow us to do this relatively simply.

Initially I tried batching the query to make parallel requests to the GCP API and avoid memory issues however I still ended up with an error and no entities written to the database.

Given that batching in this way didn’t work, along with trying various different methods of UNWIND, the next approach was to just call each request one by one for each paper. Probably not the optimal way to do it but it worked in the end.

And just to show it works… 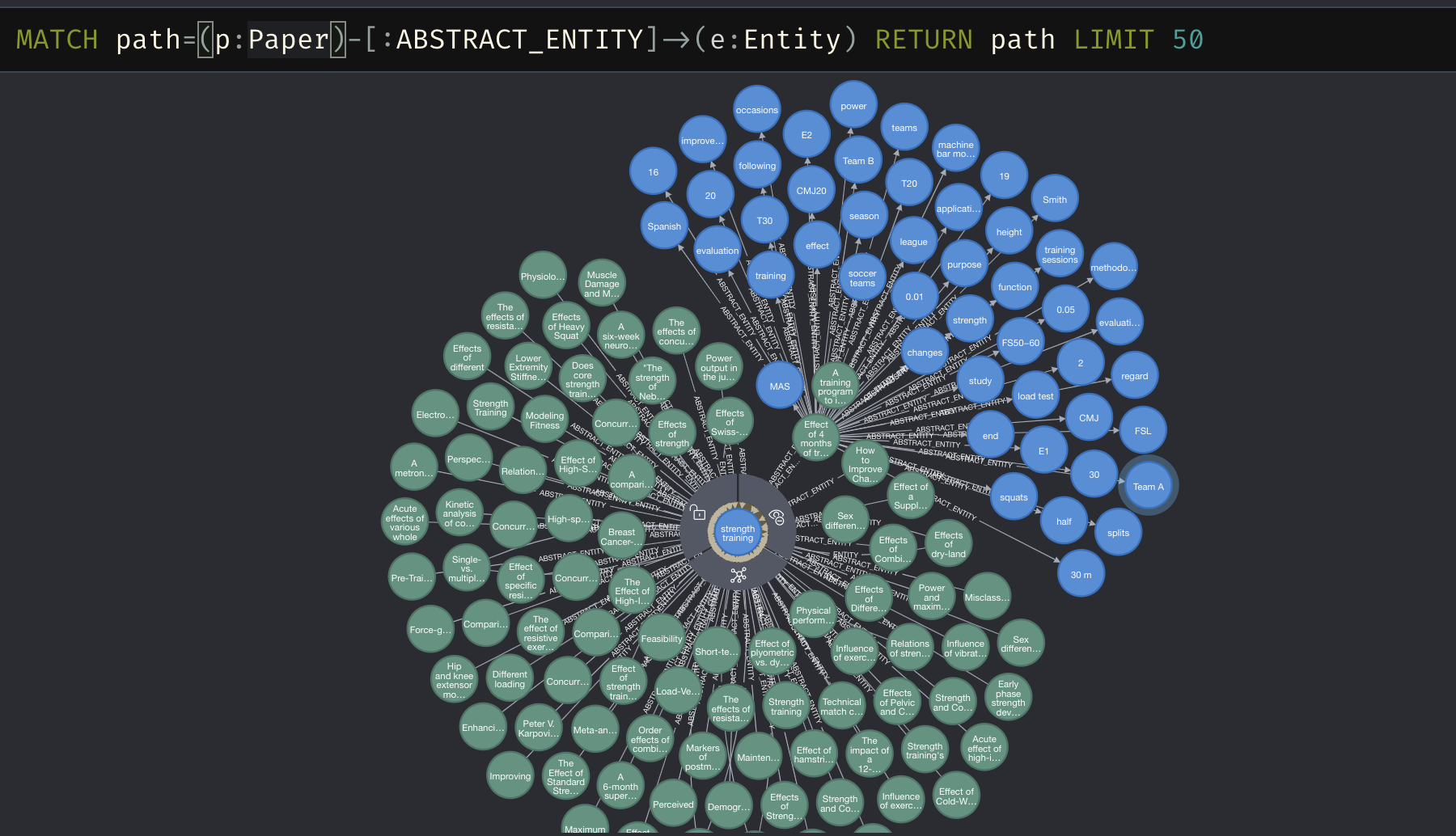 Next week we’ll look at using these entities as part of the embeddings. Until then…