So my previous post looked at the maths behind Elo ratings and this post will go over how I’ve coded the rating system up in python. When I originally coded this up it was mainly to see how Elo ratings looked in the context of Prem rugby however now I plan to update them each week in light of the prem results and post predictions prior to each round. In terms of the code, in the words of Prussian field marshall Helmuth Karl Bernhard von Moltke: “No battle plan ever survives contact with the enemy.” What do I mean by this? I mean the code is probably going to change once the season starts as it was initially written to do a single piece of analysis but will need modified to make it easier to update on a weekly basis.

I’ll go over the initial implementation and how I calculated $k$ and home advantage constants.

The above code creates a class which will scrape the season data from a certain website and create a pandas DataFrame with all the season’s data in the following format:

This dataframe will give us all the info we need for calculating the Elo ratings.

Note that any new team will start with an Elo rating of 1500:

4 - The next step is to create a class that can calculate and update Elo ratings:

The function update_single_fixture is just implementing the equations that I went over in my previous post. It takes as inputs a single row from the SeasonData table and a dictionary of PremTeam instances with the key being the team’s name and the value being an instance of PremTeam.

5 - We now need to write some code to bring all these classes together. I’ll go through it step by step.

At the end of the 2019-2020 season, the Elo ratings ended up as follows (the teams are ordered by league position - note that Elo rating may not perfectly reflect league rating as it may depend on which teams a team beat/lost to):

The way we will do this is by calculating the mean squared error between our predictions and our outcomes. More formally:

When we plot the output of the above we can see that the best values for $k$ and $\mbox{home advantage}$ are 40 and 50 respectively. It should probably be noted that home advantage may have had less of an influence in this season due to the lack of crowds but we’ll roll with it and see how it pans out over the current season. 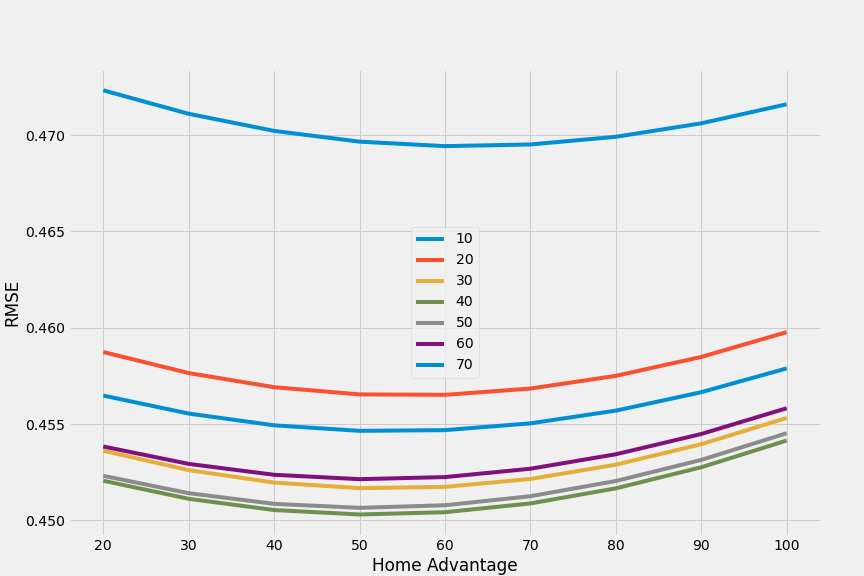 I’ll run it from the start and see where each team will be starting from this coming season. The first value represents where they ended up at the end of 2020-2021 season and the second value is their starting value for this coming season after reverting each team towards the mean.

This wraps up my post. I’ll start making predictions prior to the start of the season and we can see how accurate the Elo ratings are. Once we’re into the season and internationals start, I’ll consider revising the ratings depending on the number of international players missing amongst other things.